“The US Border Patrol adopts “Prevention Through Deterrence strategy to police the surge in migration by using walls and personnel to push human traffic away from urban areas and into remote desert regions along the U.S.-Mexico border as a means of deterring unauthorized entry.”

Formerly known as the Arizona Border Rights Project, Derechos Humanos is a grassroots organization that promotes the human and civil rights of all migrants regardless of their immigration status. Consequently, we fight the militarization of our southern border home and combat the discrimination and human rights abuses of both our citizen and non-citizen brothers and sisters. Our goals include: empowering border and urban communities to participate in public policy issues, increasing public awareness of the human rights abuses committed in regards to US immigration policy, and seeking policy change.

Tierra y Libertad (TYLO) is a grassroots organization, based out of Tucson, Arizona, that promotes the ideals of equality, justice, and self-determination. Members, supporters, and allies of the organization work for positive social change and for the respect of land, people, and culture.

DEPARTMENT OF HOMELAND SECURITY IS CREATED

In response to 9/11, the Department of Homeland Security is created under President George W. Bush, constituting the most significant US government reorganization since the Cold War. The creation of DHS consolidates 22 government agencies into a single organization, including INS and US Customs and Border Protection. In effect, immigration policing is folded into the US War on Terror.

Prop 200 requires that residents of Arizona prove they are citizens to receive any public services and to vote, and requiring public employees to report any undocumented people or face jail. Spurs similar anti-immigrant legislation in several states in the United States.

In December, the Department of Homeland Security established a zero-tolerance policy for illegal immigration. As a result, unauthorized migrants can be legally charged with “Illegal Entry” (a misdemeanor) or “Illegal Re-entry” (a felony). Those found guilty are sent to detention centers for up to 6 months before deportation, although the length of detention can increase when the defendant has a criminal record.

The Southside Presbyterian Church opened up the Southside Worker Center so that undocumented workers can safely wait for employment and directly negotiate a just daily wage with potential employers. The organization is worker-led and seeks to collectively raise the standards of worker conditions. The organization also works to empower the leadership of workers through trainings, shared decision making, and maintaining the Center as a worker-run organization. They support the right for all human beings to live and work with dignity.

In November of 2006, the state of Arizona voted to pass Prop 300, which denies students who cannot prove lawful immigration status access to in-state university tuition, or financial aid from the state. Therefore, undocumented students have to pay the international tuition rate, which in Arizona, is over triple the amount of in-state tuition. Overnight, undocumented students dropped out of school because of their inability to meet these high financial standards.

Senate Bill 1070 requires all immigrants over the age of 14 in Arizona to carry registration documents with them at all times, otherwise to be charged with a misdemeanor. It allows state law enforcement officers

to inquire about a person’s lawful immigration status during a “lawful stop, detention, or arrest” when there is cause for reasonable suspicion. The law also punishes people who shelter, transport, or hire undocumented immigrants. The grounds for reasonable suspicion are based on race and skin color, encouraging police officers to legally racially profile.

Corazon de Tucson grew out of a series of community assemblies that happened in response to SB 1070. “Corazon de Tucson is a group of families and community members united to defend our civil and human rights and create equality and justice in our communities.  We envision a more just world, free of all discrimination and oppression.  We learn from, teach, support and mobilize each other to fight for a more just world.”

Together with TYLO, Corazon de Tucson started creating the first “protection network” structures in order to keep their community organizers safe from deportation. 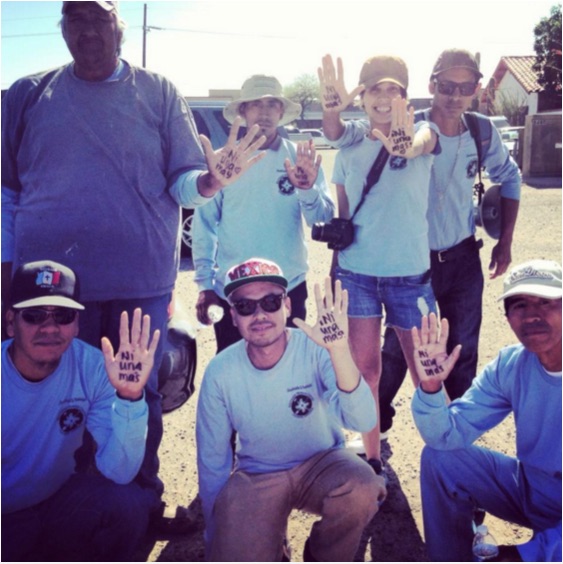 In November of 2010, a group of parents at Ochoa Elementary School organized a protection network in light of the uptick in detentions that were occurring. Five months later, the group began

meeting at Fortin de las Flores: a group of mothers who have built a powerful network to protect, educate, and empower themselves to transform their community through mutual support and community activism. The organization holds workshops to tell women about their rights. They work closely with other community members like Mariposas sin Fronteras and support community partners through fundraising.

225 recorded migrant deaths in the Southern Arizona desert:  a record high even though estimated numbers of those crossing along the entire US/Mexico border dropped over two thirds from 2000 to 2010. 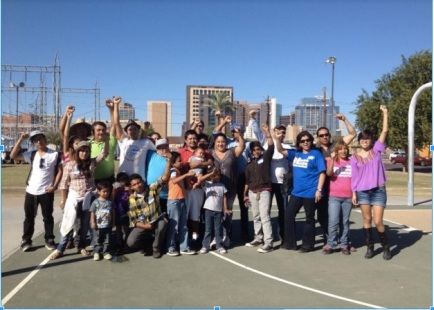 Corazon de Tucson, TYLO, Coalicion de Derechos Humanos, Southside Worker Center, and El Comite Fortin officially come together to create the Protection Network Coalition, or Red de Redes. The Protection Network Action Fund, or PRONET, is created alongside to bring resources to the coalition. In its original form, PRONET is used as a fundraising arm to produce revenue primarily to bond Red de Redes members out of detention.

DACA starts, which grants a two year employment authorization, but no pathway to citizenship. Peña Nieto comes into office in Mexico and PRI party returns.

Rosa Robles Loreto, a Tucson resident and mother, takes sanctuary at Southside Presbyterian Church to resist her deportation in August of 2014.

She was pulled over in 2010 for a minor traffic violation, and as a consequence of SB1070, was then held by a Pima County police as he called Border Patrol. Rosa was detained for 53 days in Eloy. ICE failed to refuse her case, despite Rosa fighting her case in immigration court for administrative closure. In July 2014, Rosa was told that she would be deported from the US.

On December 16, 2014, persuaded by community demonstrators, the council voted unanimously to stop School Resource Officers in Tucson’s public schools from asking students about their legal status. Undocumented students can now go to school and focus on their educations without having to worry constantly about being outed.

Tucson Police Department has agreed to only question a student’s legal status if that student is first arrested, and then undergoes a background check that reveals terrorism, gang affiliation, or felony deportation orders.

In January, Protection Network Action Fund launched Rooting for Change, a series of workshops designed for community members who are interested in improving their skills as grassroots organizers and fundraisers. We discussed how race and class impact our organizing work, how we can build communities across the two, and about making a short-term commitment to do personal funding for the Protection Network.

We had over 40 people attend, and were able to raise over $3000. Thanks for everyone who came out and showed their support! 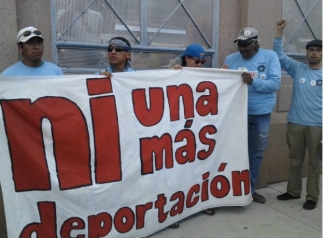 PRONET launched its sustainer campaign in the summer of 2015. The goal was reached: In 50 days, 50 people committed to give monthly donations!

Mariposas Sin Fronteras is a Tucson-based group that seeks to end the systemic violence and abuse of LGBTQ people held in prison and immigration detention. We envision a society that no longer finds solutions in the system of immigration detention or the prison industrial complex. As we work toward that goal, we support LGBTQ people currently detained in Eloy and Florence, AZ through visits, letters, bond support, advocacy, and housing upon freedom from detention.

Due to the high rate of systemic abuse and discrimination towards LGBTQ detainees, support and solidarity are critical to ending the plight LGBTQ prisoners face in immigration detention.

In November, the Red de Redes voted in favor of creating a Organizing Fund alongside PRONET’s original Bond Fund. The Organizing Fund is a general use fund that goes towards each networks individual campaign purposes.

After over 15 months in sanctuary at Southside Presbyterian church, Rosa  returns to her Tucson home in November of 2015.